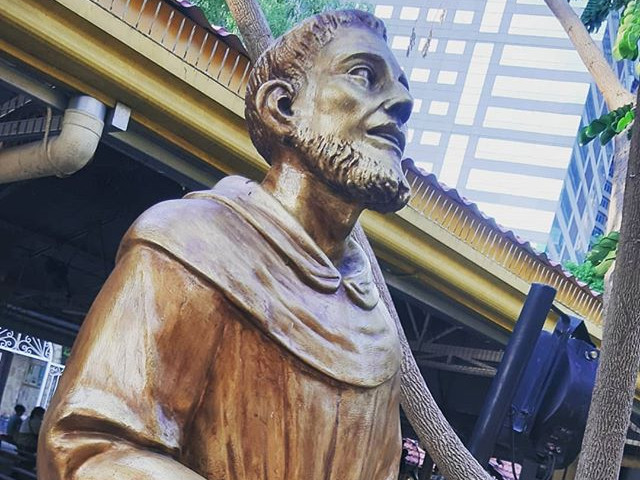 I was able to go to mass with Melmac yesterday. It was the first time I had done so in more than two years. And as I've done in the past, I'd like to reflect on the things that were given to me during that one hour of ceremony.

Yesterday's Gospel was about the famous story of the adulterous woman whom Jesus saved from being stoned to death. And Jesus did so by scribbling stuff on the ground and, after, daring anyone in the mob who had not sinned to cast the first stone. Of course, nobody dared and the mob eventually dispersed.

My friends and I have an old joke about this. As it goes: Jesus dares the mob to cast the first stone if they knew they were free of sin. In frustration, the mob disperses as the Gospel says. But as Jesus approaches the woman to comfort her, a big rock suddenly smashes the woman's face. Jesus turns around then exclaims, “Mommy, you shouldn't have done that!“

The priest gave a nice homily. But as homilies often go, it segued from subject to subject until the priest ended up talking about why, during the last days of Lent, statues and icons in the Catholic tradition were covered by cloth. I don't remember the exact reason for it as I was occupied by my own thoughts about woman who, although not actually adulterous, is quite dishonest.

I wish I didn't have to say that it was going well between Bunny and me when she suddenly became cold. She told me that we ought to stop seeing each other because she wasn't ready to be in a relationship. And I didn't understand because prior to her telling me, we were in agreement that we weren't in a hurry; that we just appreciated checking up on each other, as well as meeting up for joyrides before having breakfast.

Having met online, it was by mutual consent that we removed the applications that we use to meet new people. I won't go into specifics but it was a nice arrangement.

It had been one hell of a week for me from being nearly ghosted. If I had hair, I'd have pulled all of it out thinking about what changed, why it hurt so badly, and where hope was. And after that, I decided I'd install Tinder just to check out if I can find new people to talk to.

Lo and behold, the first profile I see was Bunny's. “Recently active”, it says. That's when I knew where I stood— what little was true and how much wasn't. And I would just love to cast several stones right now.

But sometimes, segues are a good thing.

What I vaguely remember from the priest's homily was that, sometimes good has to hide itself because of the overwhelming evil around it. Evil that cannot be reasoned with and only festers as it multiplies. Sometimes, instead of seeking "justice" to right what the evil has wronged, the best thing to do is to let evil eat itself.

So, I'm just going to be quiet under this veil. I've already been blocked anyway (imagine that!). I will take this on the chin, fall face first on the ground, and scribble my words across the dirt. I will pick myself up. As someone who's faultless would a rock. Eventually.

The good will always prevail— such is the promise of Easter.