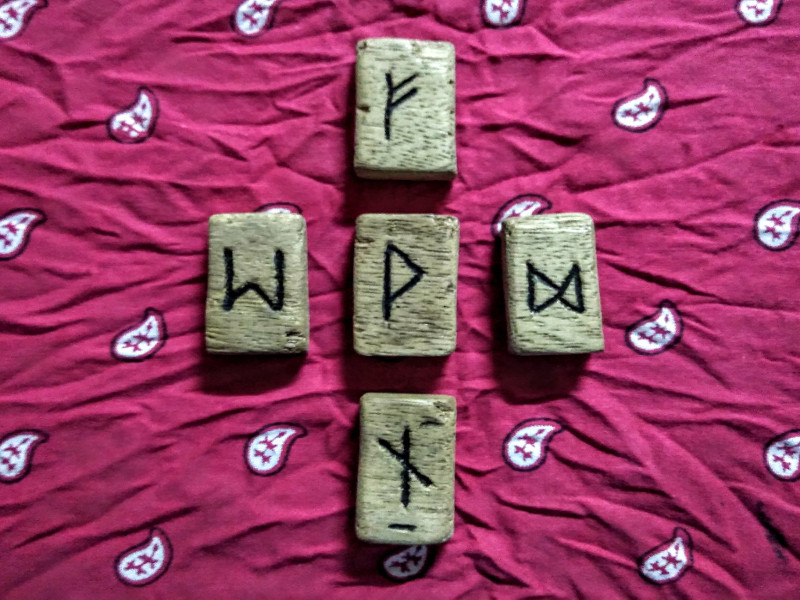 I don't normally bring out my Runes because they're scary. I've spoken to some people who are scared of “fortune-telling” because they believe that it's the Devil's work. I've spoken to others who are equally scared simply because they feel that glimpsing the future, particularly when they don't like what they are told, challenges their free will.

What are runes anyway? They're basically letters in the old Nordic alphabet. Much like most other past and present systems of writing, each rune represents a sound that used to represent a thing. And that combination of representations is what allows people to communicate in writing. But the old people, I don't know why, also saw the runes as a way to communicate with their gods— perhaps imagining how those that they worship would spell or write out the answers to their questions and problems.

I don't really believe in that shit. But I like looking at symbols, trying to decipher what they mean, and imagining serendipity at work. It scares me because even if I don't believe in Odin or Thor or Freya or any of those old Norse gods; drawing the runes just works for me. They have never led me astray. They have always kept their word— whether I agree with what they say.

In 2016, I had a choice of whether to work in Quezon City or in Taguig; the message basically was: try to stay away from friends. Ranulf and I are still in good terms (we were just chatting earlier, if fact) but I chose the job in QC and stayed there for one and a half years. That is where I got to practice a lot of the things that got me my current job, where I have been for a year and four months. And the sort of projects that I worked on there has recently opened some new doors for me.

In 2018, I drew them again when I had another choice of whether to work in Makati or in Taguig; the message was the same: try to stay away from friends. Matt and I are still in good terms. We weren't really chatty with each other to begin with but I've seen him and Mickey here in Makati several times since I moved, and there's really no bad blood between us. But why would there be?

Today, on my birthday, I drew my runes again. I had no questions. I had nothing in particular in mind. And here is what the runes had to say:

“You've misused your talents. You've let your thoughts run wild and never learned to tame them. When your thoughts became words, they were more noise than music to everyone's ears. You've caused chaos and discord and dissonance. Don't be surprised to find yourself in pain, in need, in emptiness— to find your fire extinguished. But for every hurt, there is a remedy; for every shortage, a resource; for every time the darkness comes, there will be fuel to burn. Many challenges are on their way. Many will get in your way. But if you do not forget the lessons of Fehu— of having everything you need when you need it, you will always overcome. You will always succeed. There will be much to celebrate, to feel satisfied about, to share with those that have fought and will fight by your side. Wherever your battles take you, whatever darkness brings you; the Sun will always rise. The morning will always come. There will be light.”

The rune to the right— the future— is called Dagaz. Look it up and what it represents.